Thanks to all the 200 tenants of all tenures, workers and unions, homeless and other campaigners who took part in the Summit – and good
to meet all the new groups and campaigns.

We are demanding action for Grenfell and on fire safety, new council housing, stopping demolition, rent controls, Universal Credit and scrapping the 2016 Housing and Planning Act.

Ministers’ promises about Grenfell, about new council homes, private renters’ rights and action on safety are proving hollow and we are part of growing grassroots movement demanding action.

At the Housing Summit last weekend, 200 activists and campaigners drew up an action plan for the next steps to truly solving our housing crisis, find it here:

As part of the solution to the London housing crisis, as Mayor Sadiq Khan promised, is the need for new council housing and social rent, but the Mayor’s current plan includes nothing. We want a ballot before any estate demolition. We want council homes built on former Holloway and other prison sites. We want a campaign for full funding of all fire safety measures as ministers’ promised.

Let us know about housing campaigns in your local area and let’s continue our fight into 2018 stronger than ever.

To demand permanent homes for all the surivivors, now.

” I’m sorry I can’t be with you today. There’s never been a time when housing has been such an important issue for millions of people. We have a deepening housing crisis created by decades of allowing policy to be dictated by the market. Housing policy must be about providing homes for the many, not investment opportunities for the few.

This weeks budget shows the government is not prepared to take the action needed to solve the crisis. Beneath the accounting tricks and spin, nothing they announced on Wednesday will guarantee that a single additional home is built.

We need to change direction. A Labour government will invest in housing. By doing that we’re also investing in the next generation. So I want to see a return to building high quality, energy efficient council housing, with secure permanent tenancies and truly affordable rents. The post-war Labour government managed to build half a million council homes in five years. We need that scale of ambition again.

But we also need to look at other aspects of the housing crisis. The situation for private renters is appalling, paying half or more of their income on rent, often for sub-standard, overcrowded homes and mostly only ever two months away from an eviction notice. Labour will give cities the powers to introduce rent controls, and improve the tenancy conditions of private tenants so they can plan their lives without constant insecurity.

When councils come forward with proposals for regeneration, we will put down two markers based on one simple principal:

Regeneration under a Labour government will be for the benefit of the local people, not private developers, not property speculators.

First, people who live on an estate that’s redeveloped must get a home on the same site and the same terms as before. No social cleansing, no jacking up rents, no exorbitant ground rents.

And second, councils will have to win a ballot of existing tenants and leaseholders before any redevelopment scheme can take place.

Real regeneration, yes, but for the many not the few.

Grenfell Tower was a preventable disaster. Real Justice for Grenfell means a society where there’s decent, secure, truly affordable and safe homes for all. The next Labour government will deliver that. “ 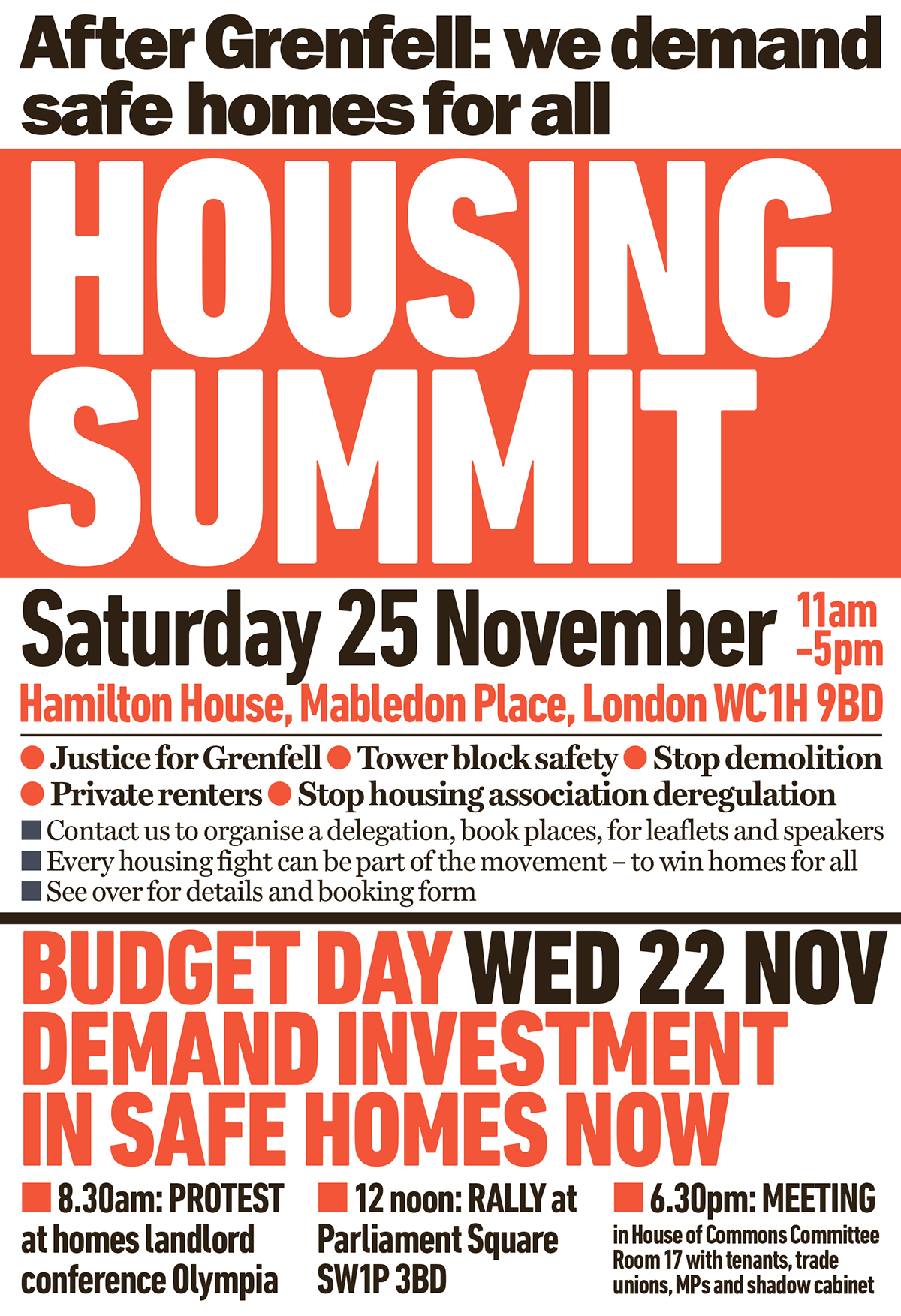 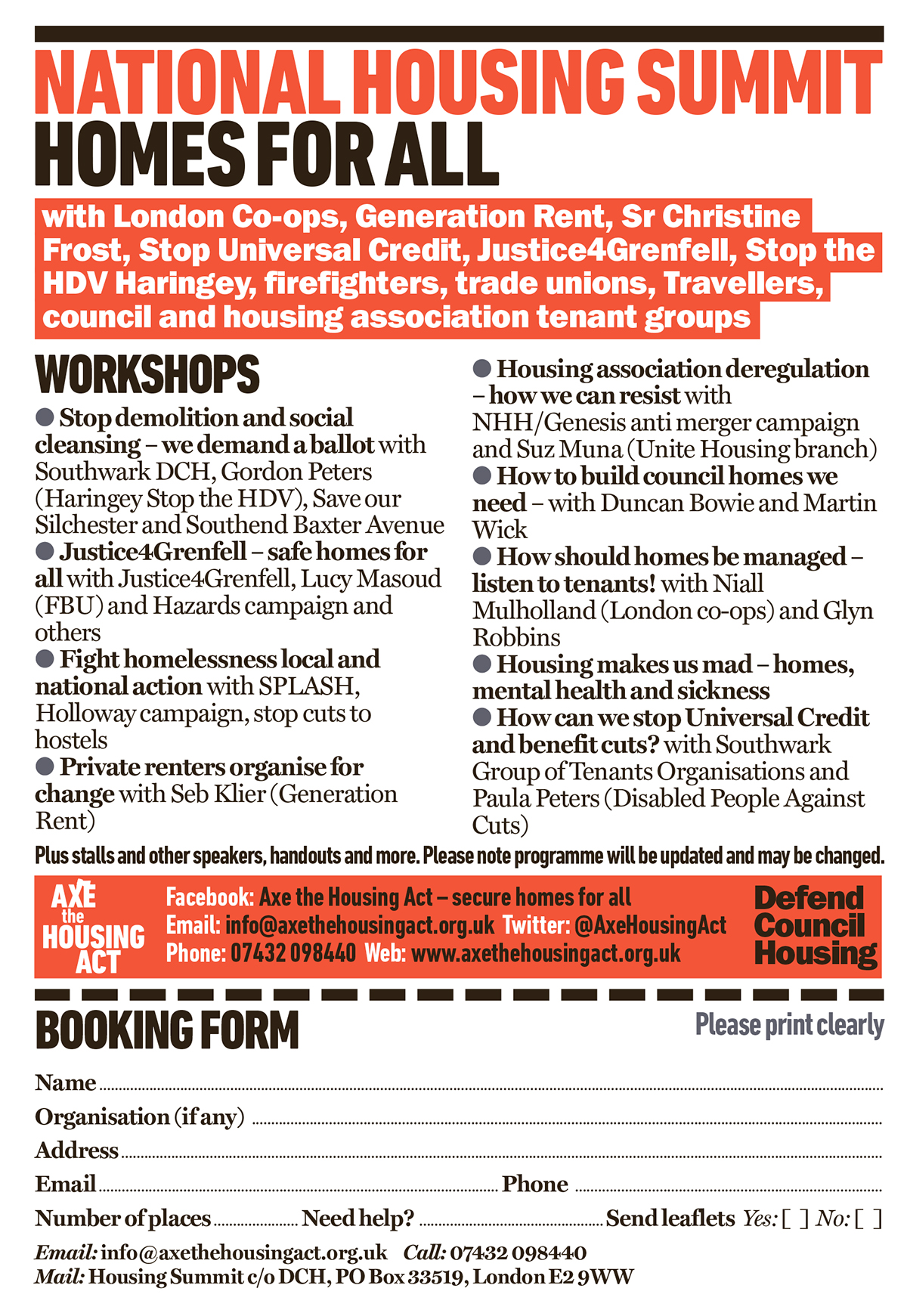 The Homes for All Housing Summit on 25th November promises to be a day of learning, discussion and galvanisation.

The Summit will be a place for all attendees, guest speakers, housing workers and campaign groups to come together to share their work and ideas and strategize how to win the next round of battles for housing and communities across the country. To discuss how to put a stop to social cleansing, how to pressure the government to build more truly affordable homes and how to Axe The Act once and for all.

This year we will be hosting a series of workshops for you to attend throughout the day; smaller groups focused on one particular issue facing us all at this moment.

How To Build Council Homes We Need

How Homes Should Be Managed

How Can We Stop Universal Credit

All are welcome to attend. Please get in touch with us to confirm your place by email, phone or mail.

Join the Islington Axe The Act and Holloway campaign groups to demand that the former Holloway Prison site be used for council housing. The authorities are currently seeking development offers for the large plot of land in London and in this time of severe truly affordable housing shortages the last thing London needs is more luxury flats.

Help pressure Sadiq Khan and government officials to get involved and listen to what the citizens of the city truly need at the next protest this Tuesday at:

And you can also sign the Petition here: https://www.change.org/p/sadiq-khan-council-homes-on-the-holloway-prison-site

Following this, also on Tuesday will be the next Grenfell silent march; meeting at 6.30pm Notting Hill Methodist Church, details found here.

On Budget Day 22 November The Government will announce where and on what (and on what not) all our money will be spent. We consider this a day of action to pressure our elected representatives to hear our cries for better, safer, secure housing for everyone; to build more genuinely affordable homes; to stop what we consider social cleansing; to save our communities.

Join us on these actions at:

8.30 am at Olympia where will lobby with Notting Hill, Genesis and other housing association campaigners

6.30 pm join campaigners and MPs in House of Commons Committee room 17 to hear what the budget does(not) include and what we need to do next. Shadow ministers are among those confirmed.

In the lead up to our Homes For All Housing Summit 2017 and as Britain’s housing crisis worsens, politicians from all sides are (finally) seemingly eager to discuss new approaches to Housing. Many of the proposed solutions come no where near to truly fixing the problems at work. We need massive investment in truly affordable, social housing with rent controls for all sectors.

As Government cracks up, housing campaigners are pushing for action on Budget day 22 November, and the national housing summit 25 November.

Government housing policy is collapsing. Enforced sell-off of council homes on the open market, and extending right to buy to housing associations, are “policies…no longer showing any real signs of life” says Inside Housing magazine.  The sell off of valuable council houses “will be scrapped, not least because it would have required legislation in the House of Commons and given the parliamentary arithmetic that would have been a major challenge” say Sky.

We need action on rent controls and council housing, an end to demolition and clearance, an end to attacks and more rights for tenants. That means linking up locally and nationally, getting organised and demanding action.

Join us at the next Homes For All organising meeting next Saturday 11th November 2017, 11a.m at:

Where we will discuss and outline ideas for our Housing Summit or send updates and suggestions to spread the word and build the action. All welcome. 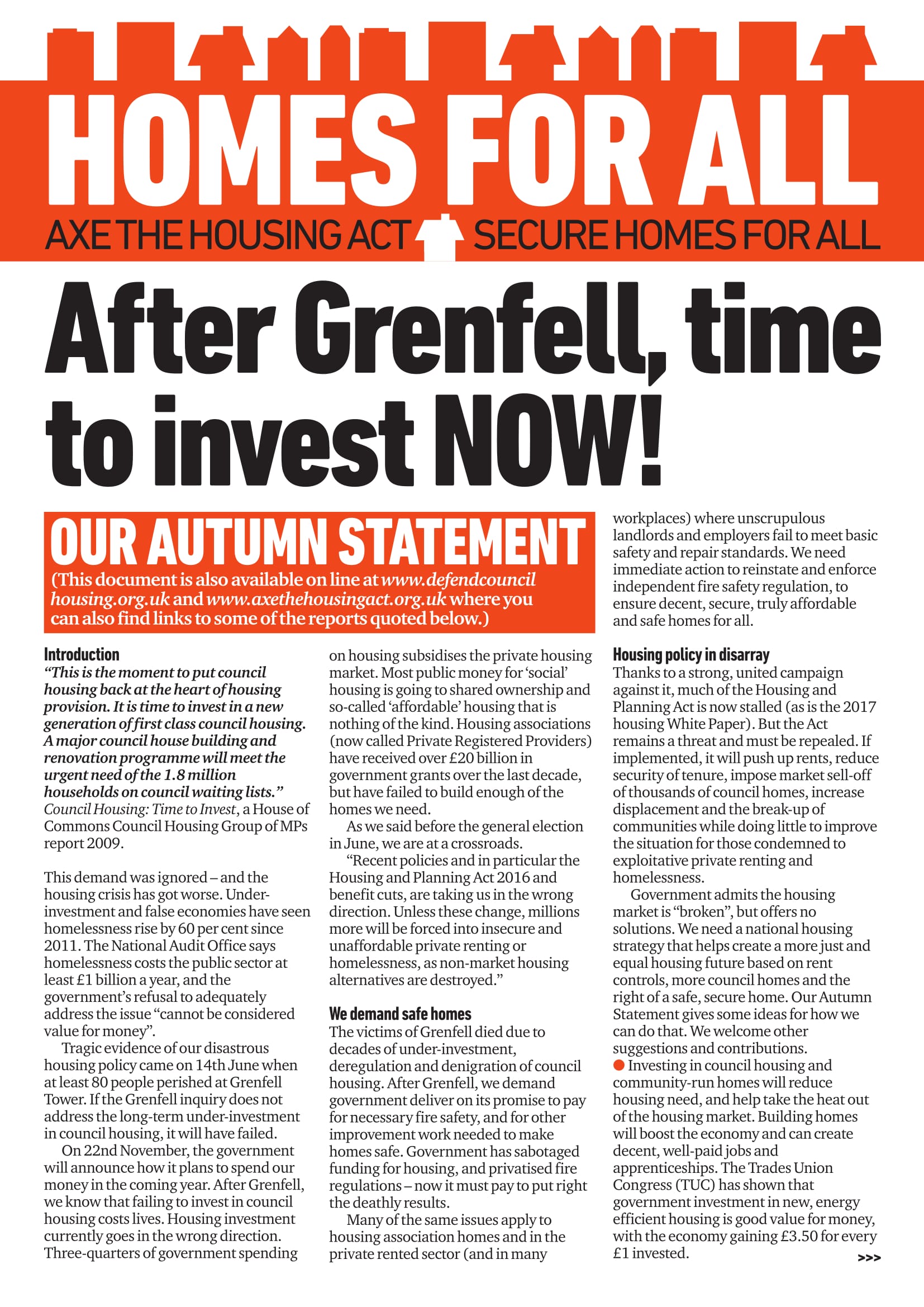 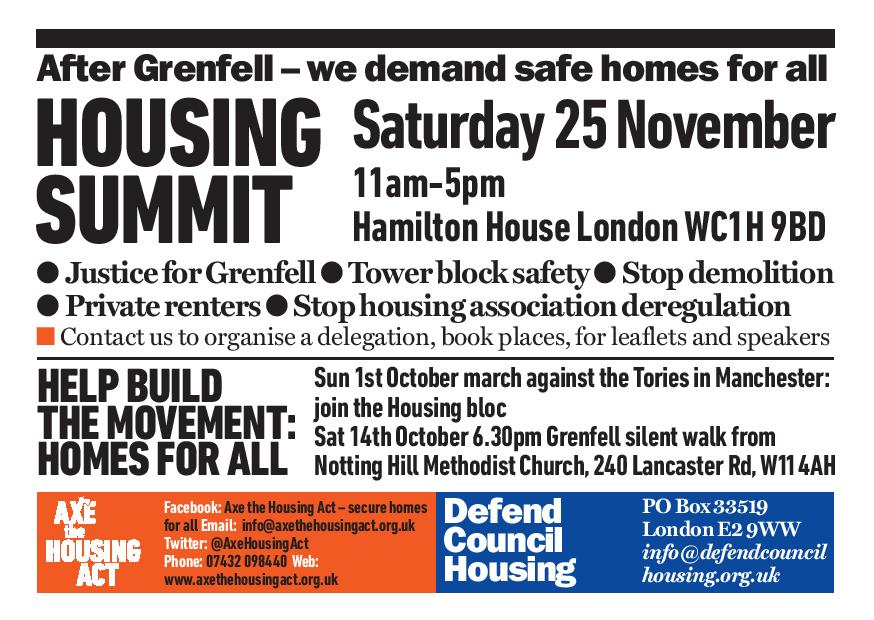 Following on from last years productive and galvanising event – we are proud to announce our plans for a 2017 Housing Summit, taking place this November 25th 2017, at Hamilton House, London.

Please get in touch with us if you would like to register an interest in attending or want to help out. Or are you a housing worker or tenants group or organisation who would like to contribute to the summit through discussion or a workshop? We’d love to hear from you.

The Homes for All housing summit on 25 November will bring together the growing housing movement, with bookings already from across Britain.
Generation Rent (private renters), Hazards campaign and homeless groups are among groups taking part.

Get in touch to book places and for leaflets to use locally – leaflet link here:
http://www.axethehousingact.org.uk/wp-content/uploads/2016/07/HomesForAllsummit25Nov17.pdf

As the political party conference season comes to a close – there is now a greater recognition from political leaders that Britains housing crisis demands immediate action.

Come to our next organising meeting this Saturday 7th October, 11am at:

And help us finalise plans for the Housing Summit we are planning on the 25th November.

Our fringe meeting at the Labour Party Conference drew 100+ delegates and visitors, many determined to build local housing campaigns.

At the conference a resolution was passed calling for more council house building, replacement of any council homes demolished, and a residents’ ballot before any major redevelopment plans. Jeremy Corbyn restated these aims and plans for rent controls, in his high-profile conference speech, and a review of housing building, planning, regulation and management.

We are launching an Autumn Statement for Homes 2017 to press for action to invest in council homes, regulate housing associations, cut private rents, and Axe The Housing Act.