On Friday 15 April UK at 6pm, thousands will assemble at Downing Street to join aMarch With the Homeless, with the march culminating in a mass ‘sleep out’ at Southwark Council Offices from 9pm. The demonstration is being organised byStreets Kitchen, a homelessness justice organisation, and the Kill the Housing Billcampaign coalition, whose housing bill demo was attended by 10,000 people last month.

This Friday’s protest aims to highlight rising homelessness as well as provide practical support to those sleeping rough, in an offer of solidarity not charity. Campaigners say the Housing Bill will make many more people homeless. Protesters have been asked to bring tents, sleeping bags, food, clothes and shopping trolleys in preparation to March with the Homeless and offer #SolidarityNotCharity. Campaigners planning the ‘sleep out’ said that there would be music, free food, warmth and community.

As well as the central London protests, activities are planned across the capital and across the UK. On 15 April, there are March with the Homelessdemonstrations planned in ten UK towns and cities and Kill the Bill campaignersare gathering outside town halls and housing offices for sleep outs in Camden, Hackney, Hammersmith, Islington, Lambeth, Southwark, Tower Hamlets, Harlow and Leeds. Faith leaders, homeless people’s organisations, community groups and local councillors will be attending the sleep outs.

The protest comes as two major elements of the Housing and Planning Bill were defeated in the House of Lords. The Government could be forced to make concessions following these embarrassing defeats, with opposition to the Bill outside of Parliament growing every day. Campaigners vowed to continue to fight every element of the Bill, as it threatens to force more people into insecurity and homelessness.

According to a broad definition of homelessness which includes people living in emergency or temporary accommodation, nearly a million men, women and children are set to become homeless by 2020 unless the Government takes action to address a crisis. Street homelessness has doubled in the last five years – with over 7,500 sleeping rough in London in the last year.

A spokesperson for Streets Kitchen said: “Streets Kitchen works tirelessly to provide essential services for the homeless community. We have seen levels of homelessness double since 2010, and we are calling this demonstration to demand an end to this crisis. There is no reason in this society for people not to be able to access adequate housing other than lack of political will. People on the streets are being killed by political indifference, and it is time for everyone to come together and shout ‘enough is enough’.”

A spokesperson for the Kill the Housing Bill campaign said: “As many people are beginning to recognise, the Tories’ Housing and Planning Bill will worsen the housing crisis and escalate homelessness. It aims to destroy council housing, condemning millions to a lifetime of insecure, expensive private renting, and does nothing for the rising number of people who have no secure place to call home. The Housing Bill is down and now is the time to kick it – we will continue the fight against every element of the Bill, both inside and outside Parliament. Everyone deserves a decent home, but landlords, developers and the rich are the only ones to benefit from this Bill.”

53 year old teaching assistant Janice Sweeney has never been politically active before but now spends much of her free time lobbying against the Housing Bill. She has raised considerable support from members of the House of Lords and will be at the West London Sleep Out at Hammersmith Town Hall. Jan explains: “I’m going out there to prevent my grandkids being homeless in the future. Whole working class communities are being broken apart.”

Protests are set to continue throughout this weekend and on Saturday 16 April, Kill the Bill campaigners will join a ‘Housing Bloc’ as part of the People’s Assembly demonstration for Health, Homes, Jobs and Education.

1. According to homelessness charities and government’s own figures, seeIndependent. 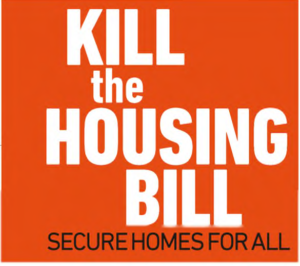