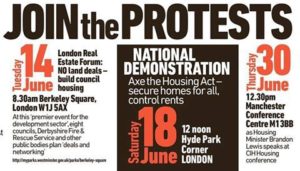 At last months strategy meeting the , renamed, ‘Axe the Housing Act’ campaigners committed to fight to prevent implementation of the hated Housing & Planning Act. The discussion ranged from calling on councils to block and stop implementation of the Act to building networks of resistance on estates and in communities to provide advice, stop evictions and stop the sale of council property and land.

People pointed out that we are fighting a government at war with itself. A government that is being investigated by 12 police forces as to whether it bought the last election. The Housing & Planning Bill was not in their manifesto but will result in the biggest fire sale of public homes and land to property developers in history. A divided government and an illegitimate Act.

On our side there are still millions of families living in council & housing association housing. Millions of people that the government wants to drive into the hell of the private rental sector with its uncontrolled rents and insecurity of tenure.

Our campaign has the task of continuing to explain to millions of people the disastrous impact of this Act will be. To help organise social housing tenants alongside private renters, lease holder and home owners to fight to defend and extend secure housing, controlled rents and the right to a decent home.

As a start a number of protests were called for June.

Our campaigners are organising estate meetings explaining the Act and organising resistance. If you want to help organise or need a speaker email killthehousingbill@gmail.com.

Leaflets and posters can be downloaded from ‘Resources’ menu.

We are then many they are the few.