With pressure mounting, we urge the Labour Party to formally support the repeal of the Housing and Planning Act 2016.

Show your support by passing a resolution at your trade union, political or community organisation. Motion template below.

” This [organisation] agrees the Housing and Planning Act (2016) and the subsequent Housing White Paper is a grave threat to all social housing and will greatly worsen the present serious housing crisis. 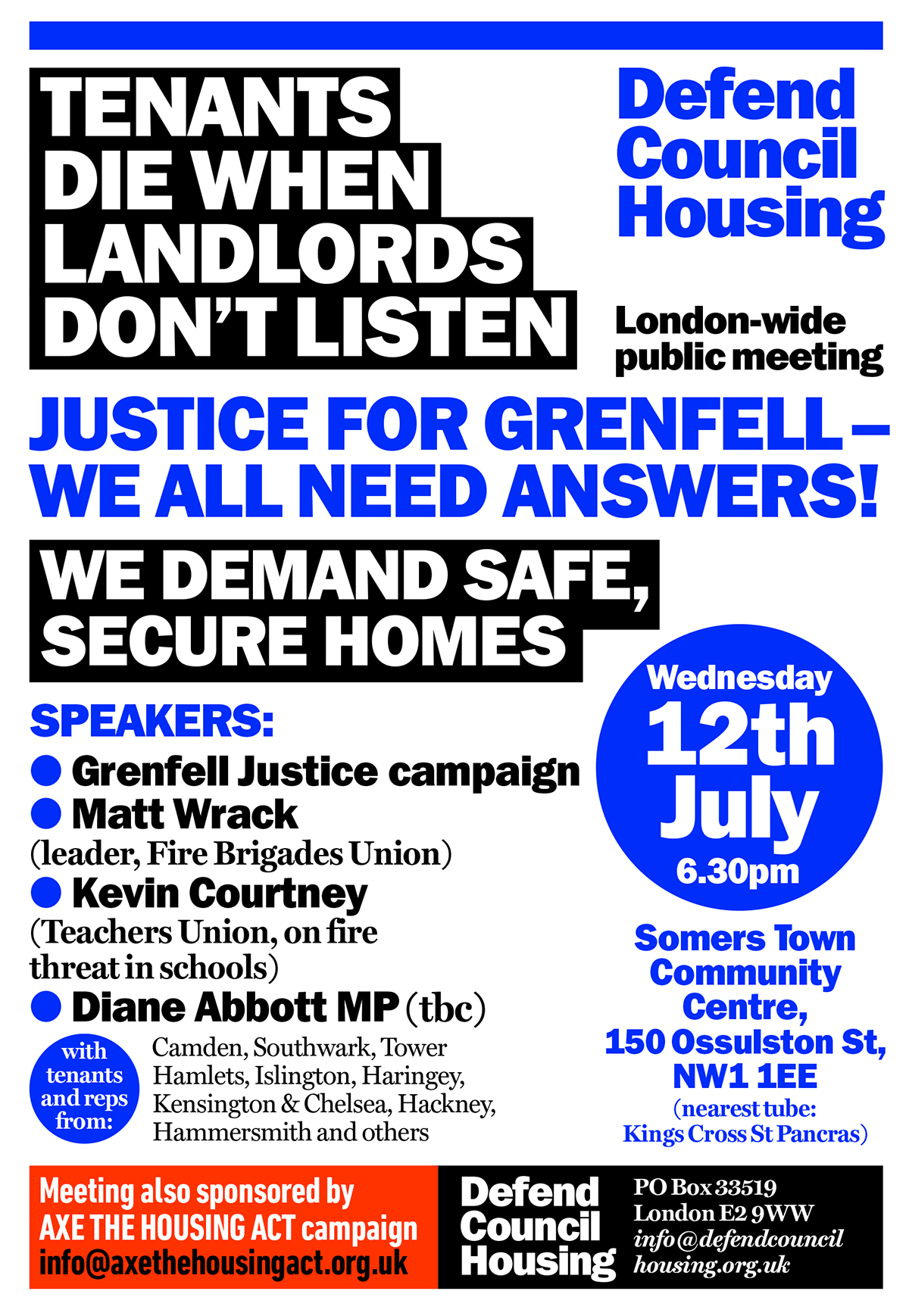 The terrible Grenfell fire and the failed response of local and national Government, is now exposing the lethal mix of cuts, neglect and refusal to listen to residents, across Britain.

In hundreds of meetings, people are attempting to hold landlords to account and force them to act. Several councils have committed to fit sprinklers in all tower blocks: these include Birmingham, Sheffield, Croydon, Southampton.

We are co-sponsoring a London-wide meeting on Grenfell and fire safety, with Matt Wrack of Fire Brigades union, Kevin Courtney of Teachers union, tenant groups and campaigners.

This meeting will be held on July 12th, 6.30 pm at the Somers Town Community Centre, 150 Ossulston Street, London NW1 1EE.

Please invite local residents and others concerned to secure justice for Grenfell and safety in our homes, schools and hospitals. 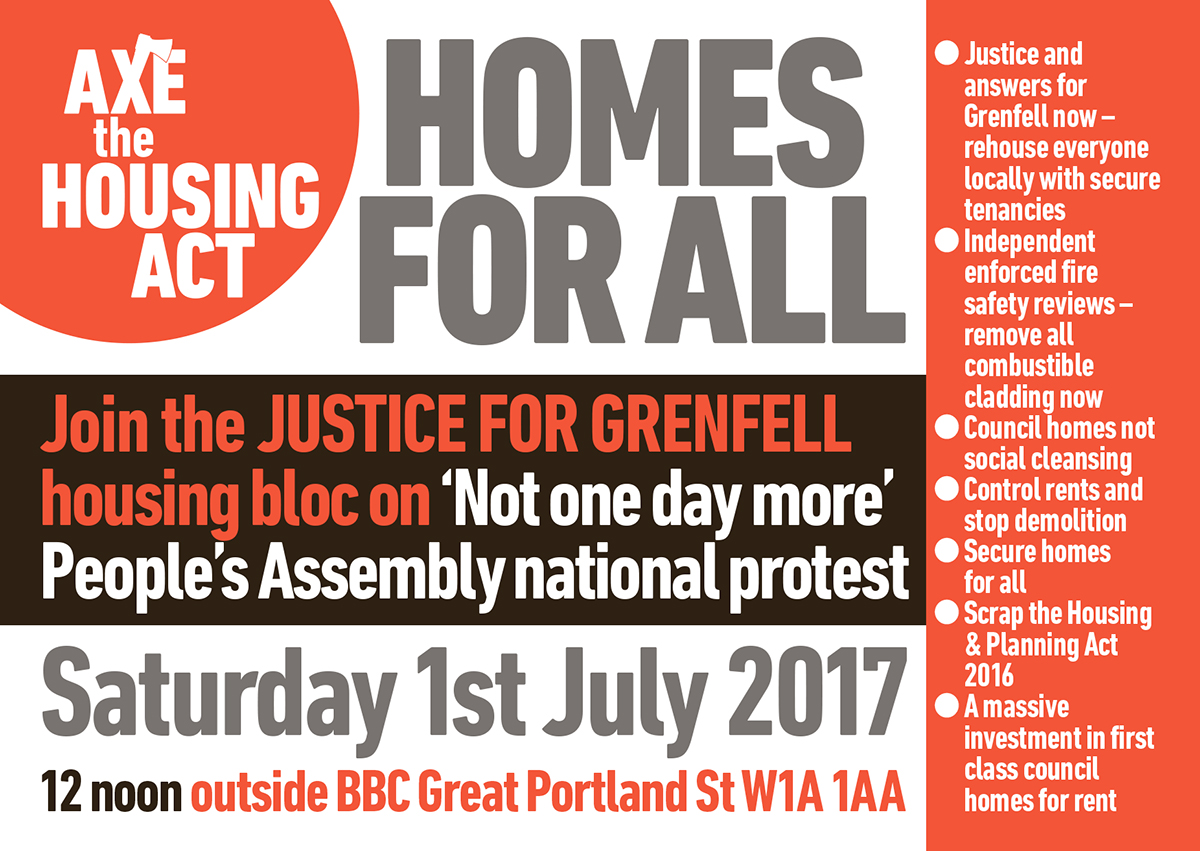 Axe The Housing Act will be marching this SATURDAY 1 JULY at the Peoples Assembly National Demonstration: Not One Day More 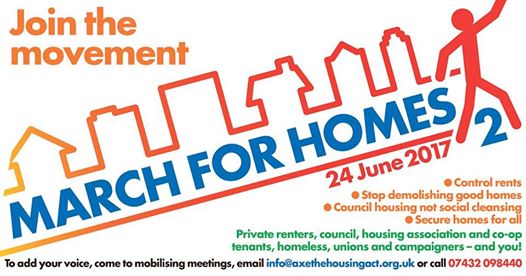 Millions voted for change on June the 8th, including a new approach to housing.

With the government and its Housing and Planning Act now in paralysis, we push forward with our demand for decent, secure homes and rent control for all.

The terrible Grenfell fire is exposing criminal failures and neglect, savage cuts to public services and the refusal of this and many landlords, to listen to tenants.

At least 17 people have died in the fire at Grenfell Tower. They deserve justice. We demand answers. 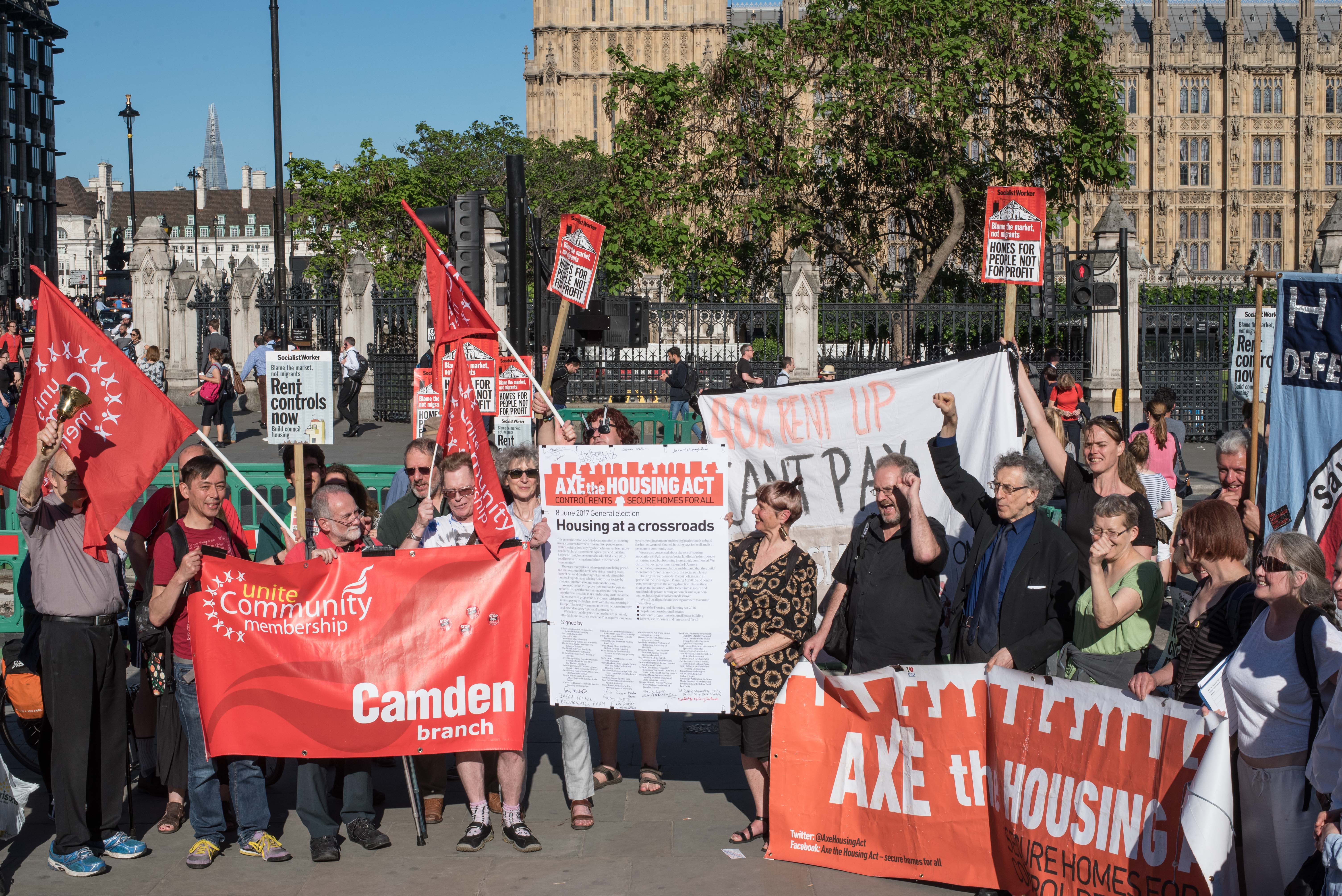 A letter signed by film maker Ken Loach, academic and author Danny Dorling, the Bishops of Stepney, Southwark, Croydon and others, Generation Rent, Demolition Watch London, plus trade unions and many others, was symbolically delivered to 10 Downing Street.

Launching the ‘Housing at the Crossroads’ election letter earlier, supporters explained why they signed the letter:

“We are coming together to fight for our rights. Nurses and teachers facing a 40 per cent rent rise demand, have had their pay capped so their real income is falling.   We want to link up with tenants of other housing associations, and trade unions, to build a bigger housing campaign movement.”

“Nearly all the people who lived in St Michael’s Gate a year ago have lost their home.  It could be you next.  Past governments have failed us.  That’s why I’m supporting this statement and demanding decent, secure homes and rent control for all.”

“All parties in this election need to commit to scrap the Housing and Planning Act, and invest massively in social housing.  Housing co-ops are an important part of the housing we need, and need land to develop more.  They do not replace council and housing associations and that’s why we are part of this movement. The Housing Act 2016 is still a threat.”

“Housing associations are being deregulated due to the Housing and Planning Act. They are pushing up rents: Genesis is demanding a 177 per cent rent increase from secure tenants, many pensioners.  The National Housing Federation is just acting as a bosses’ club for housing associations.  The Housing Association Residents Action group wants to help link up HA groups.”

“There are more private renters in the UK than voted for the last Government. Private renting is now a cause of poverty and homelessness. People aren’t moving into it as a lifestyle choice, it’s because there’s no alternative. We want rent controls – not just caps – and security from eviction for private renters.  We also want to see more council housing, and to link our housing campaigns together.  We need an organised, mass private renters movement – it will be a massive force for change if we are organised.”

“We need to link housing campaigns to the wider campaigns against austerity.  This election is a clear choice for all of us, as housing workers, tenants and leaseholders.”

“I remember when I first saw the film ‘Cathy come Home’ and it made me cry.  We are going back to those days.  I was privileged to grow up in council housing – now in Leeds there is spreading homelessness everywhere and 25,000 on the housing waiting list.  This is not a London crisis – it’s a national housing crisis.”

“The key thing we have to win is a vote for residents before any estate can be demolished.  We have a right!  The demolition of council housing must stop – it’s social cleansing.”

Eileen Short of Axe the Housing Act, which co-ordinated the letter and protest, said:

“The election matters.  And whatever the result, we will be back here on 24 June.  The pressure of campaigns has helped put housing on the political agenda. We are determined to keep it there.” 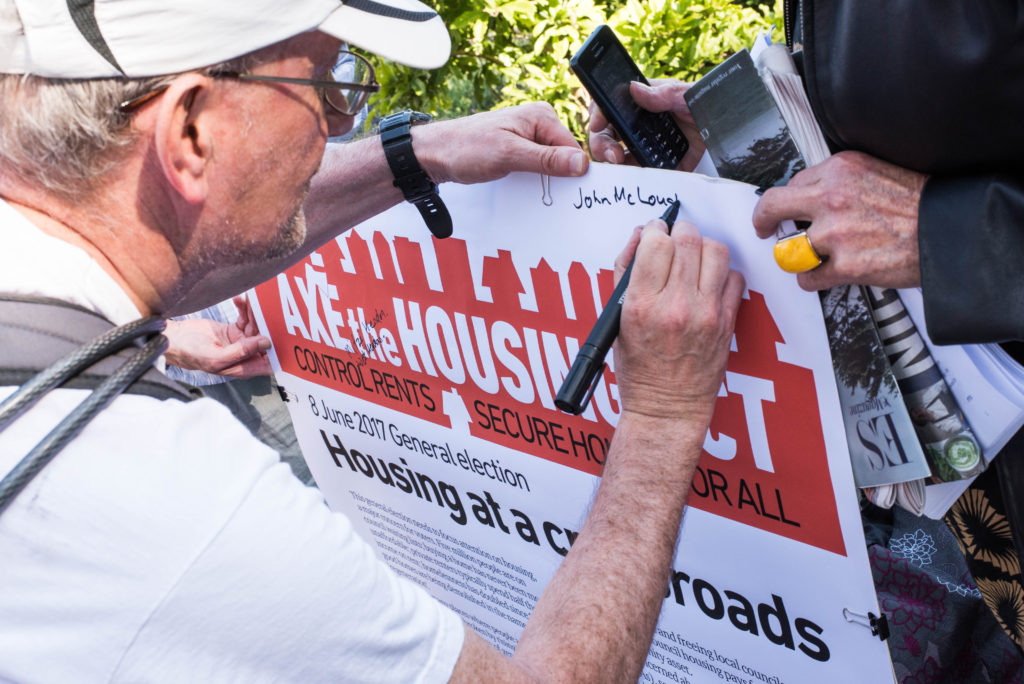 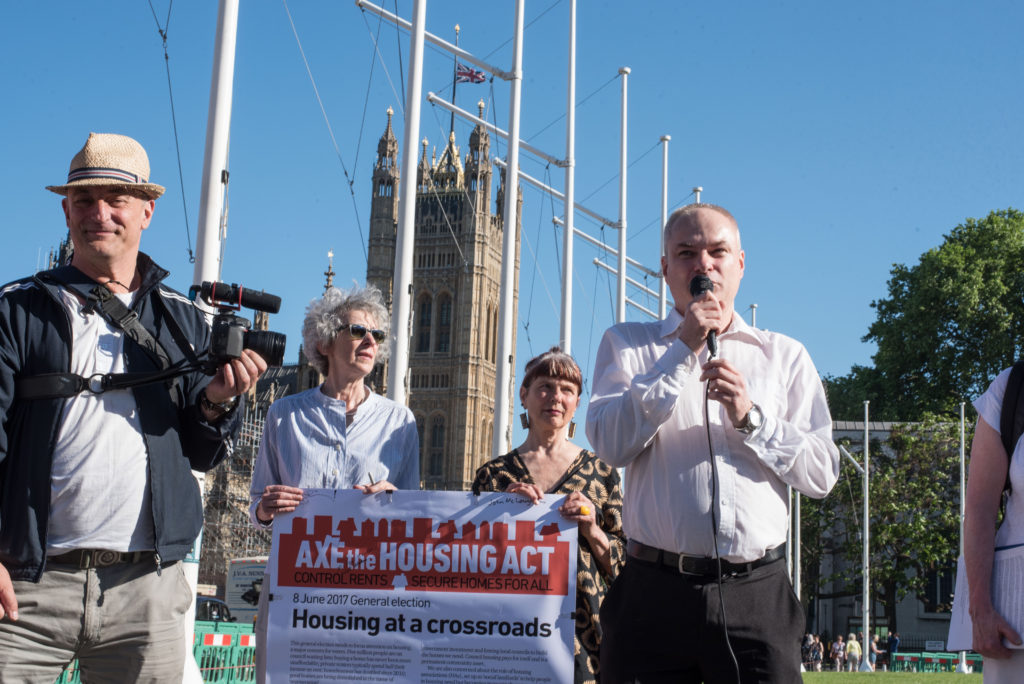 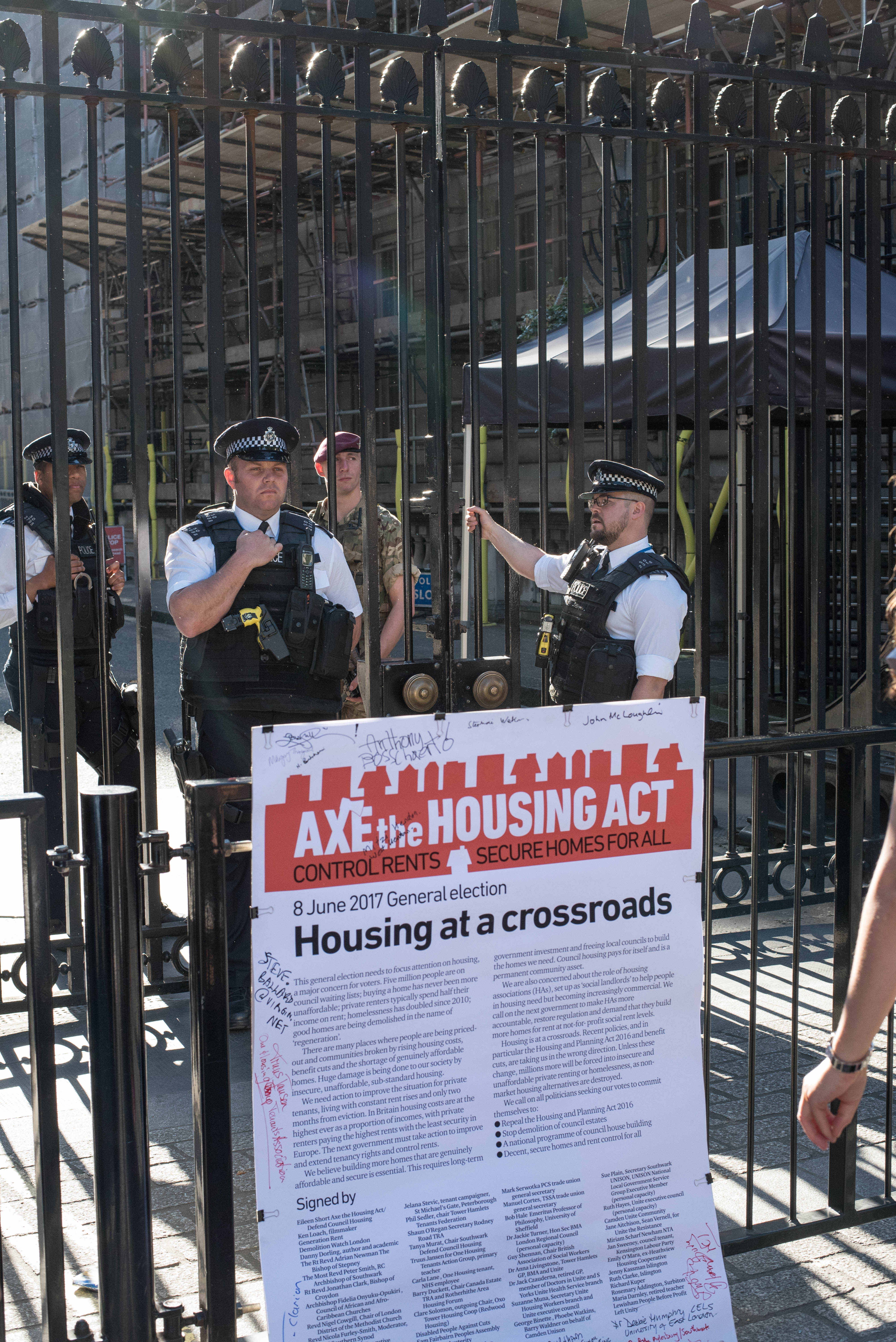 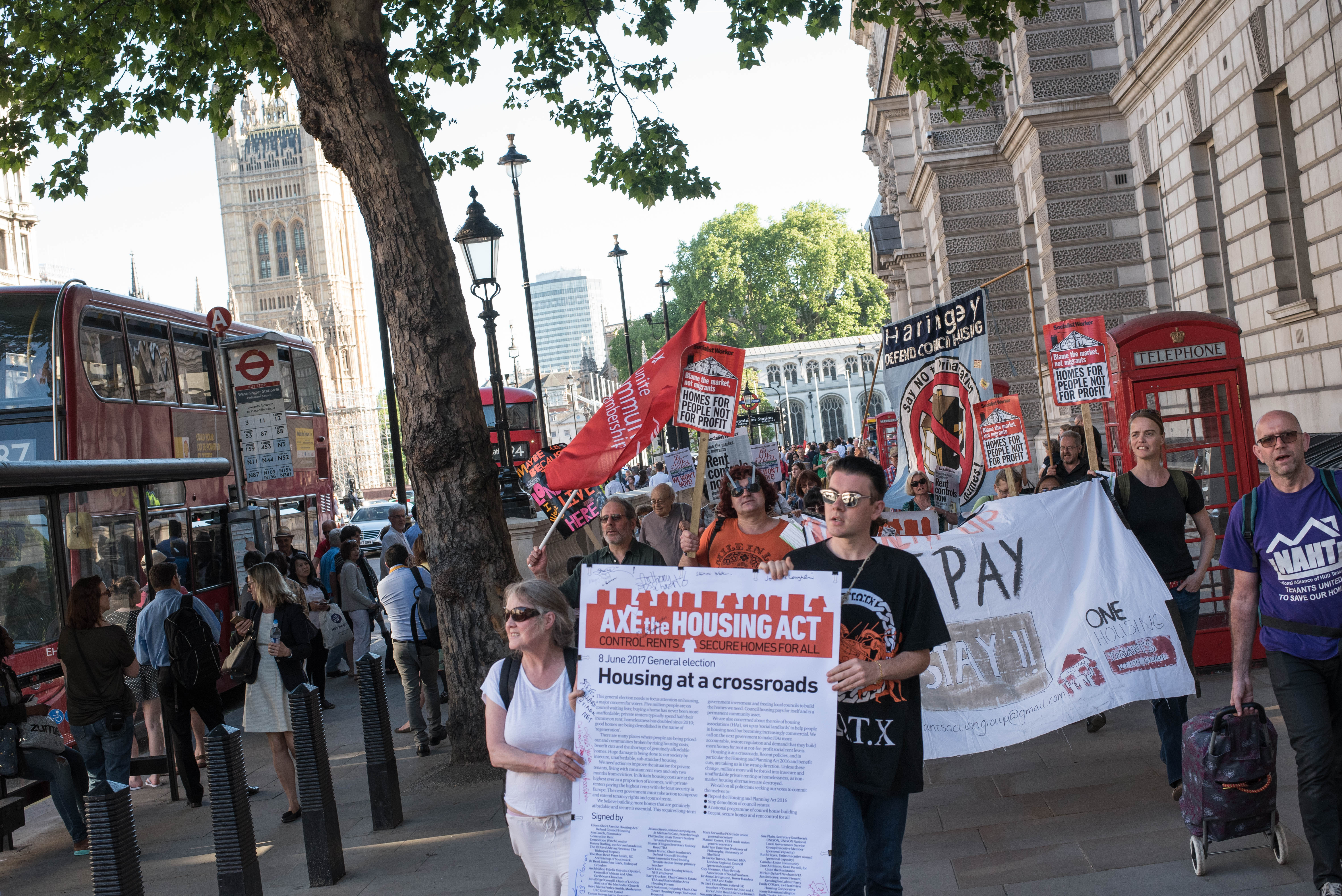 All Photographs by Debbie Humphry. 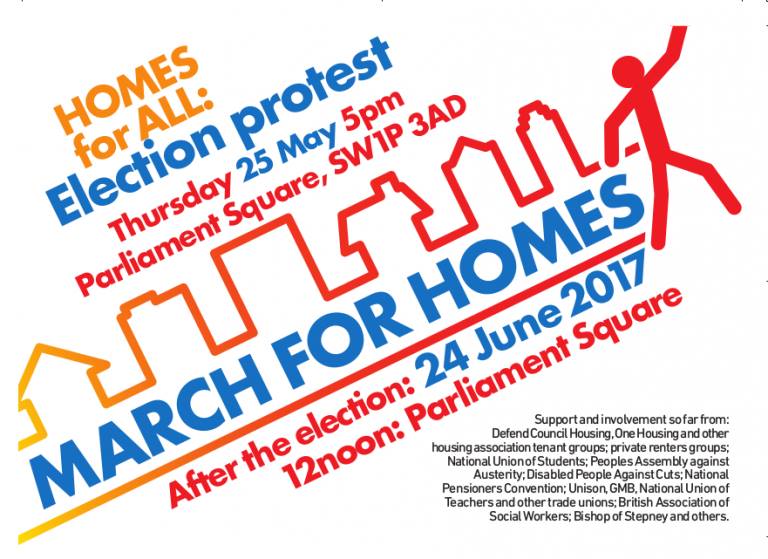 For a ‘Homes for All’ election protest to expose hollow Government promises on housing and benefits, and demand action – see our Facebook event (please share and invite others):

Come along with banners, friends, neighbours and workmates – and bring keys (real or cardboard) with your housing message attached. We will deliver them to Housing and Benefits ministers! 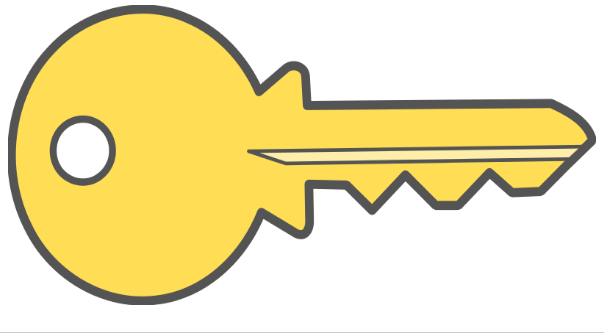 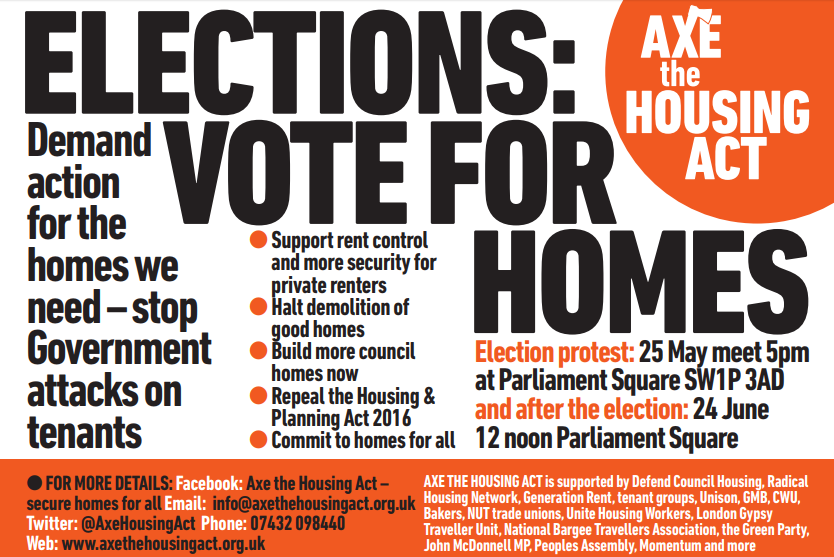 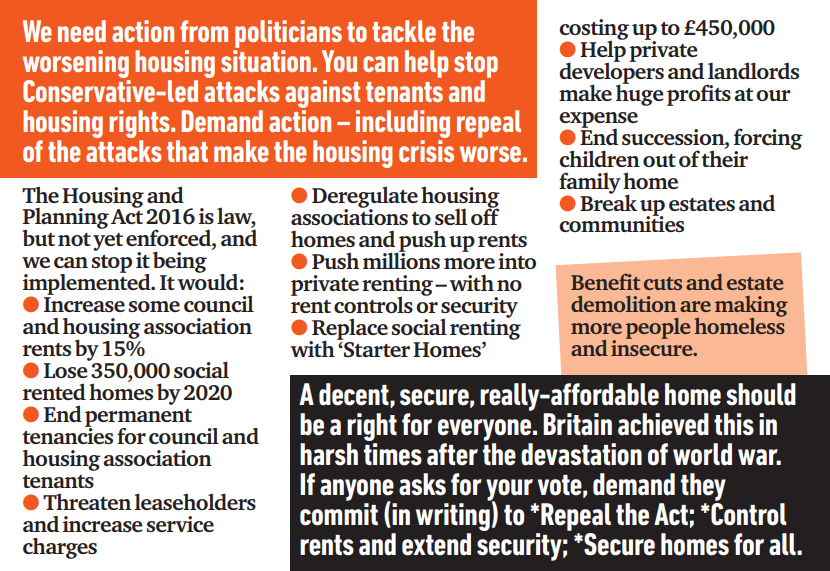 Join us at our Election Protest in London on 25th May 2017 at Parliament Square, London SW1.

In this upcoming general election we must demand housing be at the forefront of all political agendas.

The latest development on the former Heygate estate at Elephant & Castle, has provoked outrage and as a result has received wide media coverage:

We want homes local people can afford, built for people not investors (wherever the money comes from).

Axe the Housing Act – secure homes for all.

Our next organising meeting for the Axe The Housing Act campaign will be on Saturday April 22nd.

We will reconsider our plans, as Teachers unions have announced an important march against education cuts, on 24 June clashing with our planned march.  Suggestions include co-ordinated days of local protest,  and stepping up pressure on the Housing Minister to defend lifetime secure tenancies and extend these to all tenants.

Come along with ideas, or email reports, ideas and suggestions to demand an end to the Housing Act’s threats, rent controls and secure homes for all.  Such homes were build amid economic and social chaos after 1945 – it can be done now!